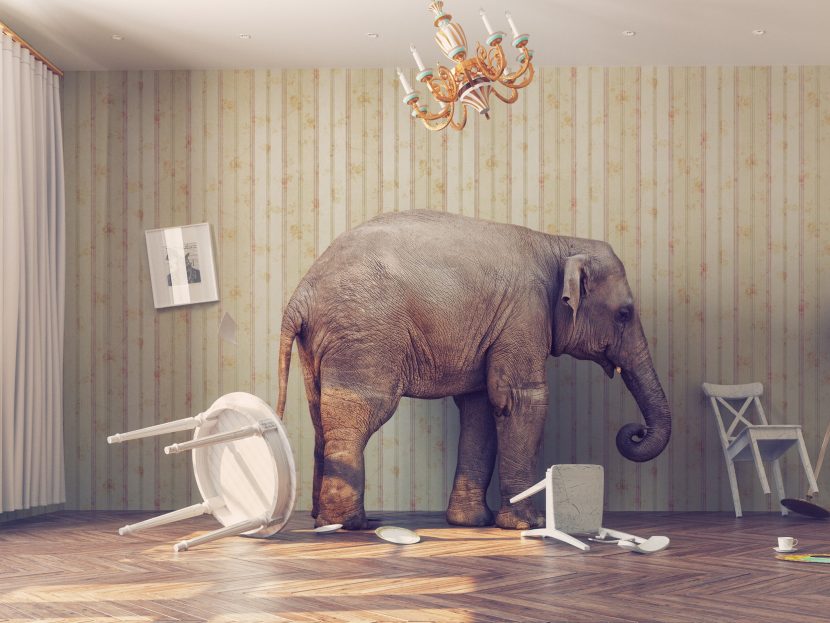 Business speak is a zoologist’s dream – from the disruptive 800lb gorilla (“Where does he sit? Wherever the hell he wants”) to the shark tanks and dragon’s dens of the pitching world; from the dog-and-pony shows of corporate presentations, to the sacred cows that provide every organisation with its own incontrovertible truths and doctrines.

But no animal gets referenced as much as the elephant. What is it about business people and elephants? If they’re not trying to eat them (one bite at a time, naturally), they’re trying studiously to ignore them.

Which doesn’t make sense. I’ve been confronted with a real-life elephant; it wasn’t quite there in the room with me, but it was right outside the front flap of my tent (yes, I have been on safari; sorry about that). And when you’re stood less than 10 feet away from two tonnes of angry pachyderm, with little between you but a patch of open scrub and the smell of fear, it’s pretty hard to ignore.

So why do we do it? Well, mostly because turning a blind eye is easier to do than facing up to reality. Acknowledging the elephant can be frightening. It can be disruptive. It means asking difficult questions – and not everyone is equipped to do that, whether it be through lack of confidence, absence of the required skillsets, or because they’re stuck in a culture that does little to encourage independent thought.

But sometimes, as I found out that day under the African sun, confronting the inconvenient truth head-on is the only way to move forward. I’d probably still be cowering in my tent today if I hadn’t drawn attention to the problem standing in front of me, enlisted the help of my fellow – and equally terrified – bush campers, and done something about it (shout loudly and wave your arms like a lunatic, in case you ever find yourself in a similarly tight spot).

I was reminded of this recently in an interview given by professional cycling’s Sir Dave Brailsford, head of Team Sky. He felt that despite numerous recent successes (and masterminding three Tour de France wins in the last four years in an event Britain hadn’t won in over 100 years of trying is certainly not to be sniffed at), the team had grown stale in its approach.

His only option was to tackle the problem head on. “If we want to change this we’re going to have to rock this boat, as uncomfortable as it is,” said Brailsford. “It’s going to be stressful, it’s not going to be pleasant but ultimately you have to rock it from side to side, bring new people in who will question everything, ask why we are doing this, take us forward.”

It was a bold move. On the face of things, the team was still performing well. But Brailsford clearly recognised that standing still wasn’t going to work in the long term, and that the team needed to challenge itself in order to move forward and maintain an advantage over its rivals. His approach is about celebrating dissenting voices. It’s about embracing cognitive diversity. It’s about – to coin a hideously over-used business expression – thinking outside the box. And it’s a pretty good mindset for organisations to consider adopting in an age of digital disruption.

Because digital disruption is not just hype. It’s a seismic shifting of the old order that’s only just begun and will have massive implications on your business. Innovative technologies are not only disrupting business operations in ways that have never previously been seen, they are fundamentally changing the way we do business and forcing a rethink on how we interact with both customers and partners.

Too often we ignore the elephant in the room in the hope that customers will too. But today’s customer is too savvy, and too willing to call us out regarding our own (in)actions, to be fooled for long. Standing still is no longer an option. Embrace the challenges facing your business and be disruptive – or risk getting trampled.